Former Ugly Betty star America Ferrera said “I do” to longtime boyfriend Ryan Piers Williams on Monday, her rep confirms to Us Weekly.

Ferrara and Williams exchanged vows at the stunning Chappaqua, New York home of her Ugly Betty costar Vanessa Williams, with a bevy of Hollywood stars in attendance: Blake Lively and Amber Tamblyn (her Sisterhood of the Traveling Pants costars) plus such Ugly Betty cohorts as Rebecca Romijn (plus her hubby Jerry O’Connell), Mark Indelicato and Judith Light — who officiated the proceedings!

The couple first met as students at the University of Southern California, when Williams cast Ferrera in a film. The two have been living together since 2007 and even share a golden retriever named Buddy, whom they refer to as “our baby,” she told W.
Source: OMG 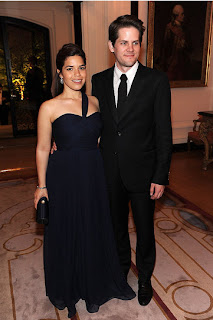 The wedding ceremony of the actress with the director was an intimate and private affair, attended by close family members and friends. 27-year-old America Ferrera married Ryan on Monday night at America’s former co-star Vanessa Williams’ house in Chappaqua, upstate New York.

The big day for the couple turned out to be a mini-cast reunion for the former ABC show which ended last year. While Vanessa Williams loaned her place for the nuptials, America Ferrera’s co-star Judith Light officiated the wedding ceremony.

Unlike her character in the hit ABC show “Ugly Betty”, America Ferrera glowed as a gorgeous bride as she exchanged the vows with her longtime filmmaker boyfriend, Ryan Piers Williams. The representative of Ferrera told, “The bride wore a dress by Amsale’s Christos label and Fred Leighton earrings.”

The guests on the intimate wedding ceremony of America Ferrera and Williams included Rebecca Romijn with her husband, Jerry O’Connell, along with “Sisterhood of the Traveling Pants” co-stars Alexis Bedel, Amber Tamblyn, and Blake Lively.

The Emmy-winning actress, America Ferrera, got engaged to Ryan Piers Williams in June 2010, after more than three years of dating. The duo initially met at the University of Southern California when Williams cast Ferrera in his student film.

A source close to couple revealed, “They aren’t one of those flashy couples.” Last June, Ryan, who now owns a production company, proposed America Ferrera. Later that month, the actress flashed off her diamond studded engagement ring at the Edinburgh Film Festival in Scotland.

After her engagement with Williams, America Ferrera stated, “We kind of connected from the get-go on that professional level and that was something that really drew us to each other, a shared passion for what we do and our work.”

For her marvelous performance as Betty Suarez in “Ugly Betty”, America Ferrera earned great recognition and also won a Golden Globe, an Emmy and a SAG award. While promoting her 2010’s “Our Family Wedding”, Ferrera deemphasized the significance of marriage in comparison of the strength of relationship.
The actress said at that time, “One of the things I love about my character is that the wedding day isn’t the most important thing to her. She wants to live her life with the person she loves the most, and that felt like a modern story to me – something I could relate to.”

Since “Ugly Betty” ended after completing its four-year run in 2010, America Ferrera was most recently seen in a recurring role on the CBS drama, “The Good Wife”. The actress will also lend her voice to a character in animated film “How to Train Your Dragon 2.”

Going in to Business with your Spouse can lead to a Fuller, Happy Life

Here’s what makes relationships last, according to ‘Sleeping With Other People’

I have loads to say, and some say that I can be a great listener. So let’s chat in comments?

I woke up much later than usual on a Monday mornin

It snowed in Berlin today. I saw my first snow of

Let us live like flowers, wild and beautiful, dre

Almost everyone around me has decided to stay at h

Hello folk(ses), kya haal? I am going to have a re