8 Ways to Keep It Cool While You Are On the Roads!

There’s nothing that can make your blood boil on the road like a bad driver. You’re sat behind the wheel just wondering, how on earth they managed to pass their test. Clearly, they need to take another driving course (you can read more about that here). But before you lose your cool, it is important to remember that there are steps you can take to protect yourself and your vehicle from damage. So, go on, follow these 8 tips to stay calm in the car this summer travel season.

1) Trade in that pine-scented air freshener for a peppermint candy or cinnamon stick.

In a NASA-funded study, scientists from Wheeling Jesuit University monitored the emotional responses of 25 college students during
simulated driving scenarios. The volunteers reported that peppermint lowered their
feelings of anxiety and fatigue by 20 percent. Peppermint and cinnamon each decreased their frustration by 25 percent, increased alertness by 30 percent, and made the ride seem 30 percent shorter.

Learn to accommodate other drivers, says Dr. James. Instead of competing with them, support them. “If they want to enter the lane ahead of you, make space. If they want to pass you, move over and let them. If they want to cut you off, slow down,” he says. “When you’re a supportive driver, not only does the stress vanish, but you also begin to enjoy traffic,” he says.

“Try life in the right lane,” Dr. James suggests. People often avoid the right, or slower, lane because they fear losing time. But if you drive in the slow lane, you’ll keep pace with less aggressive drivers and may realize it’s not slow after all, he says. Research shows that the average commute in the United States is 25 minutes. Driving in the fast lane generally saves about 10 percent of that time. So the commuter who rushes arrives at his destination only 2 to 3 minutes ahead of the slower driver. Don’t believe it? Time yourself and see.

4) Control yourself.
Don’t let other drivers do it for you, says Dr. Nerenberg. He asks aggressive or angry drivers: “Do you want to turn control over to those people you’re calling idiots, or do you want to keep control for yourself?” Losing your cool is turning control over to them. Once you become aware of what they’re doing, it’s easier to commit to keeping calm on the road.

“Backseat drivers have a bad reputation,” says Dr. Nahl. But they may have a point. So listen to the “complaints” of your spouse, your children, and others who ride with you. They are witnesses to your driving.

To your passengers, that is. “A lot of drivers feel: ‘I am the captain of my ship. You just put up with how I drive,'” says Dr. James. The driver controls the air conditioner, radio stations, speed, and just about everything else.
Instead, ask your passengers about their preferences. They’ll likely appreciate the respect, and you’ll feel better about yourself and calmer while driving.

7) Get silly. Feeling tense behind the wheel? Try making animal noises, machine sounds, or whatever you find amusing. “Laughter not only interrupts your negative thinking or anger, but also unloads the stress,” says Dr. Nahl. 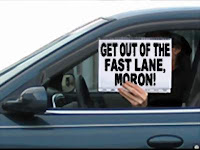 8) Forgive and forget.
If you are the “victim” of an aggressive driver, remind yourself that retaliation isn’t worth it. Think about the people waiting for you to arrive at home. “You don’t want to do anything that would endanger your life or anyone else’s,” says Dr. James. “Tell yourself, ‘It’s just not worth the hassle.’ ”

Hijab or No Hijab – None of Your Business!

I have loads to say, and some say that I can be a great listener. So let’s chat in comments?

Dress for your size. No. I will dress however I f

As soon as I can, imma jump on a plane to see them

The first time I made suji halwa was in Cologne.

My creativity has the most direct, cozy, chummy, i

Orange is red brought nearer to humanity by yellow

It is almost impossible to watch a sunset and not